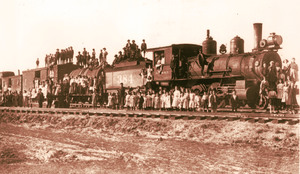 The Orphan Train Era (1853-1929) was the largest mass relocation of children in American history. Over 273,000 children were transported by rail out of Grand Central Station in New York City and sent all across America in search of homes for the homeless. The first trains left New York City in response to the Great Famine in Ireland (1845-1852) when 30,000 orphaned Irish children (Street Arabs) roamed the streets of NYC living in alleyways, wooden boxes and sewer pipes. As the Civil War began children from every ethnic group were on the Orphan Trains. The immigration of 5 million Europeans, Caribbean, South Americans, Asians and Mexicans in the 1880’s, 90’s and the early 20th Century fleeing tyranny, starvation and economic injustice filled the city with revolutionaries, job seekers and large families in an era when there was no social safety net. If a head of the family became disabled because of an accident at work, a fire in the factory or a devastating disease children were the first to suffer. In 1853 when the first Orphan Train left for Michigan there were 30,000 impoverished orphaned children living in alleyways, boxes and sewer pipes.

The Orphan Trains ran out of Chicago, Philadelphia and Boston. Some scholars estimate over 500,000 children were put on trains by orphanages, child care agencies, and asylums. The Children’s Aid Society and the Foundling Hospital centralized the use of Orphan Trains in New York City and they ran from 1853-1929. Two boys sent on the same train to Indiana later became Governors of Alaska & North Dakota. Tom has written a number of books on the Orphan Train Era and has videos pertaining to the era which he lectures on at libraries, schools and colleges.

Tom is creating an online Orphan Train Museum via his Patreon page. Patrons of this museum will receive online access to many of Tom’s books, articles, photos, and other memorabilia. In addition, one third of the proceeds will go towards helping Wounded Warriors, Feeding the Hungry and establishing an expanded and beautiful online Orphan Train Museum. For more information about this museum or to become a patron, please check out the link below: https://www.patreon.com/orphantrainmuseum